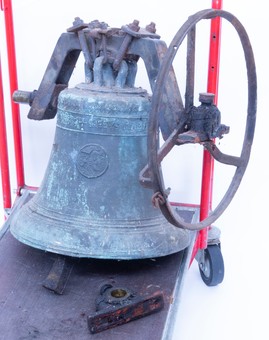 A large and monumental bronze church bell, cast by Jan Tolhuis (? - 1558) in Utrecht in 1537, with the inscription '+ IHESUS MARIA IOHANES ANA IAN TOLHWS VA UTRECHT ME FECIT 1537' -H. 49 cm including crown, D. 48 cm-_x000D_ Provenance: according to the Mill Hill Missionary the bell came from Schaarsbergen near Arnhem, and most likely came from 'Huize Vrijland'. 16th century church bells are quite rare as many were melted down during wars, in particular WWII by the Germans towards the end on the war. Jan Tolhuis is considered to be one of the finest Dutch bronze casters, who was forced to live within the city walls of Utrecht were he would cast bells, canons and morters. In 1554 Tolhuis cast a large canon, since 1767 known as 'Queen Elizabeth's Pocket Pistol' that was presented to Queen Elizabeth I by Charles V and stood on the cliffs of Dover Castle up to 1827.
Starting price: € 800.00
Login
Jun 3 2022 03:00:00 PM
Jun 21 2022 06:00:00 PM
-
5 bidders
13 tracking
324 page views