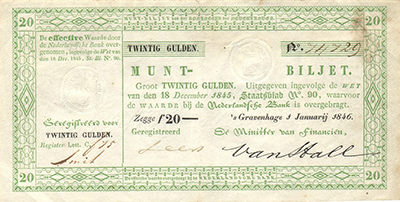 Worth knowing
The oldest Dutch 20 Guilders banknote was in circulation for less than a year and a half. Only a few copies are known.

For decades, this green-and-white 20 guilder currency note hung above a desk. It was clear that this was not just an ordinary item, but the family that owned it could never have imagined how unique it really was. They wanted to know its value, and showed the currency note (casually pasted on a piece of cardboard) to several traders and shopkeepers. The family was told that it had a value between 2,000 and 10,000 euros. Fortunately, they also brought the coin voucher to IJsselstein for an appraisal at Heritage Auctions Europe. An appraiser made it clear to them that they had a unique piece in their hands.

Paper money from the nineteenth century is by definition rare and certainly a note from 1846. It is the first year in which currency notes came into circulation in the Netherlands. These notes were brought into circulation by the Dutch Central Bank to make up for the shortage of coins. But they also quickly disappeared a year and a half later.  The currency note of the family is therefore very rare. The note bears the signature of who was then Minister of Finance, Floris Adriaan van Hall. The advice was clear: have the currency note auctioned.

The auction on November 17, 2016 in IJsselstein showed how special the 20 guilder currency note really is. It yielded a record amount of no less than 79,952 euros. That was almost double the previous record for a currency note, which stood at 44,280 euros. In 2013, also at an auction of Heritage in IJsselstein, a buyer paid this amount for a special 200 guilders currency voucher. This was the only known currency voucher with the signature of JGN de Hoop Scheffer, secretary of the Dutch Central Bank. So if you still have a currency note, framed or unframed, don't hesitate to have it appraised by Heritage!