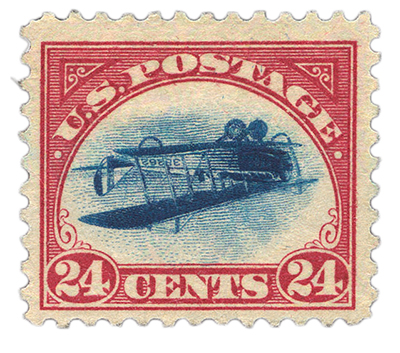 Particularities
no. 84 of the original sheet of 100.

The story of the Inverted Jenny really appeals to one's imagination. This world-famous stamp was issued in 1918 to mark the opening of an airmail connection between Washington, Philadelphia and New York. The stamp depicts the double-decker Curtiss Jenny which, at the time, carried mail by air. On one sheet of only 100 stamps, this plane was upside down: a misprint.

Collector William Robey saw the mistake at the counter and bought the sheet. He sold it to Eugene Klein for $15,000. This trader managed to resell it to Edward Green for $20,000. Edward (the son of Hetty Green, 'The Witch of Wall Street') used the fortune he had inherited from his mother to invest in stamps, among other things. The story goes that only the collection of George V, King of England could match his. Green saw an opportunity for trade. He initially kept 41 Inverted Jenny's for himself but decided to sell the rest individually and in sets of four. He put one of his own stamps in a gold medallion that he gave to his wife Mabel. She kept it until her death in 1950.

Heritage Auctions has had several Inverted Jenny's for sale including the one with medallion (unsold). In 2007, an Inverted Jenny went for $825,000 to a Wall Street executive who is actually a coin collector.